Losing a friend is always tough.  It’s tougher when they are young and have so much to live for.  That was Lucas. He died tragically on this day seven years ago, July 20, 2011.

Following his untimely death, there was much written about Lucas, and for good reason – everyone that knew Lucas McDowell Smith loved him.  He was that kind of guy.  Full of confidence. Energy beyond comprehension.  Always smiling. Loyal. Would give you the shirt off his back. You knew he would always have your back!  Lucas saw all people as equals.  Period.  His memorial was attended by friends of all ages, genders, colors, and levels of education and income.  None of that ever mattered to Lucas.  And everyone in attendance could tell you their story about the guy. 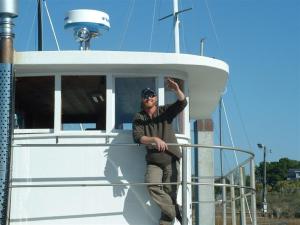 Andy Paras of the Post and Courier and Sully Witte of the Moultrie News knew Lucas, and wrote the following.  To give you perspective, I’ll let others tell you about Lucas through the stories written after his death.  In closing, I’ll only tell one, but to me, it told volumes about him.

He was an old-school boat captain and businessman who squeezed adventure out of every living minute. She was a charming free spirit from Kentucky along for the ride.Together, Lucas Smith and Cara Lee Donohue, known by her friends as Carly, soared high above the waves Wednesday in a device best described as a flying boat — a rubber raft connected to an engine and a parasail. Continue reading.

The Patch.com Editorial Staff, July 28, 2011, Updated October 19, 2011 Last Goodbye to Dewees Crash Victims Shem Creek was a place dear in the hearts of Carly Donohue and Lucas Smith, the pair killed a week ago when the light sport aircraft they were operating fell from the sky off the coast of Dewees Island.On Wednesday, at the same time the crash occurred a week earlier, friends and relatives of both Donohue and Smith gathered to pay final respects at Red’s Ice House on the banks of the creek. Continue reading.

Lucas and Carly were everything wonderful that was written about them. And more. He was a husband, father, son, and great friend to all that knew him.  He was an entrepeneur.  A boat captain extrodinaire. He didn’t just dream, he lived his dreams.  The Osprey is a prime example of that.  Carly was a much loved and loving daughter.  A sister.  A proud aunt.  She was the Osprey First Mate.  Like Lucas, she  never met a stranger.  Two weeks prior to her death, she made such an impression on two Korean tourists that they stayed in Charleston to attend her funeral.  She was a wonderful young woman living life to the fullest.

I met Lucas through my daughter and son.  The generational difference between us meant nothing to Lucas.  I like to think we learned from each other.  When I needed advice or help with our old Cargile Cutter Cruiser, “SunSmiles,” Lucas was always there.  When he wanted to talk, I’d get a call and the voice on the other end of the line would say, “Let’s get some wings at lunch.” I’m glad I never had to turn down one of those invitations.

Once when I flew with him, we had to make a soft landing off Morris Island after a throttle cable snapped. We – or I should say he – made a temporary repair by using our only tool, my nail clippers, to remove the cover of a carburator and jam the float wide open.  Say what you will, but it got us home! That was Lucas. Calm. Knowledgeable. Resourceful.

I’ll forever remember my cellphone ringing one day as I sat at my computer.  “Are you online?” he asked excitedly.  “I am now,” I replied.  “Hurry,” he said, and gave me a URL to sign into.  Up came the eBay page with the image of a boat, with a “Buy it now” price of $25,000.  Printed on the ad was the word, “Sold.”  He bought it for a fraction of the Buy It Now price.  I got the word, “What” out of my mouth before Lucas interupted with glee, “I JUST BOUGHT IT!”  For Lucas, it was another dream accomplished. The boat went on to become The Osprey, his dream party boat.

Somewhere in heaven, I have no doubt he’s looking down on all of us, and smiling. Some day we’ll meet again.  Until that day, when situations arise, and decisions must be made as we cruise “Slow Dance,” I’ll just have to ask myself, “What would Lucas do?”

I know he and Carly are “Resting In Peace, sailing on the ships of heaven.”

“Red Buoy in Fog,” photographed on the last New Year’s Day cruise with Helen, Lucas, little “Luke,” and friends, aboard the Osprey 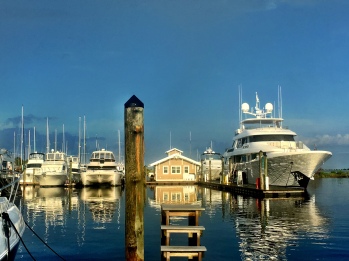 The Admiral enjoys reading, while Kate the Mate stands by the captain.
Follow Cruising The ICW on WordPress.com

Listen to your inner self..it has all the answers..

Exchange of ideas/information having value in our life

Career,health,fashion,psychology,any valuable information to help people to help themselves

A blog full of humorous and poignant observations.