Sunday, November 15, 2020. Some posts are hard to write. This one has been the hardest. On Sunday, October 18, 2020, our good friend, my former high school classmate, fellow boater, and all-around great guy, Bruce Allcorn passed away unexpectedly. I learned about it when his niece called after hearing my messages on his phone.

Our friendship began at Southwest High School in the early 1960s. After graduation, we left our hometown to attend different colleges, but a pair of Austin-Healey 3000s “reconnected” us after our freshman year. His was a black 1962, mine a blue 1961. Until the day that I sold mine, nearly every weekend during the summer of 1966, wherever you saw one Healey, you saw the other.

Our marriages and career moves “disconnected” us again in the late 1960s, but friendships that are meant to be, will be.  In 2014, the 50-year reunion of the Southwest High Class of 1964 reunited us. Our love of cars had never changed, but in a way, it was a love of boats that may have brought us closer together.

In the fall of 2016, Carolyn and I bought “Slow Dance” to cruise into retirement. In the summer of 2017, our first long cruise was to the North Carolina communities that were near and dear to us. When I told Bruce that we would be coming his way, he insisted we spend a couple of days in Wrightsville Beach. It took no effort to convince us. When we arrived at Bridge Tender Marina, he was on the dock to greet us. The trip began a tradition of spending two or three nights in Wrightsville Beach on every trip north and return trip south. In return, Bruce made trips to Charleston for British Car Club and Austin-Healey car shows, and to attend our annual chicken stew. When we were together, it was just like old times.

Though Bruce was an independent person, he was also the kind of person that never met a stranger, and would do anything for a friend. When we reconnected at our class reunion, he had been divorced for years. He was enjoying retirement and a lifestyle of focusing on family, a wide circle of friends he considered extended family, and his cats — which were as much his family as any of his friends! I think he recognized some of us friends were about as feral as some of his cats, but he loved us anyway!

And then, there were his toys — beautiful 1962 and 1967 Austin-Healeys, an equally beautiful, vintage Jag sedan — none of which had been driven in the rain in all the years he owned them, and of course, his classic Chris Craft, center console boat. Equally important to Bruce was time spent each year in Bonaire. There, he’d established another circle of friends that had evolved into even more extended family. Someday we’ll visit, just to understand his love of the beautiful place and wonderful people that he often spoke of.

Memories. So many memories.

The summer of 1966, Bruce’s mom rented a beach house at Emerald Isle, NC, and invited Bruce and me to spend a weekend with her, there. As we prepared for the trip, we had to make a choice — do we take luggage, or the top to my Austin-Healey that we would be driving? We chose luggage. Before we left Winston-Salem, and seemingly the entire trip Bruce reminded me that, “Emerald Isle is nothing like Myrtle Beach. It’s laid back and pretty quiet. I don’t want you to be disappointed.” After enjoying a shrimp dinner his mom prepared, Bruce suggested we drive to Atlantic Beach, and ‘check it out.’ As we left the beach house, I was told that Atlantic Beach was where nightlife could be found in Carteret County, but still, it was ‘nothing like Myrtle Beach.‘

Before we got to Atlantic Beach, we had witnessed a bleeding, cursing drunk, tightly strapped to a gurney, and being placed in an ambulance, after running his fist through a number of window panes at the bar/pool hall that had kicked him out. Less than a mile later, we came across an overturned VW camper (no injuries, thank goodness.) And then we arrived at the Atlantic Beach circle, to the sound of a man’s voice screaming, “Shoot me, go ahead and shoot me, you f*^*ing coward!” I moved the Healey to the far side of the street, and we found a cop as quickly as possible! Bruce was right, so far, this visit had been nothing like any of my trips to Myrtle Beach! In defense of Emerald Isle, Atlantic Beach, and Morehead City, I’ve never witnessed such excitement there since! The beautiful coastal communities of The Crystal Coast remain among my all-time favorite destinations, whether by boat or car.

After our exciting Saturday night, we left quiet Emerald Isle on Sunday. When we crossed over the Morehead City bridge, we were looking up at a very, very dark sky. We glanced at each other, realizing we could be in for a wet ride home in the topless Healey. Leaving the Morehead City limits, the rainstorm hit us! But as we often experienced in our young and crazy lives, an angel — in the form of a Lincoln Continental — came flying around us. We pulled so close in behind that Lincoln that it felt like we were drafting the leader of the Daytona 500! Amazingly, at the speeds we ran, the windshield deflected the rain right over us — and equally amazing, that Lincoln leading us, perfectly timed every green light from Morehead City to Garner, NC! We were completely dry as passed through Raleigh! It was another one of those ‘you can’t make this stuff up’ moments!

Carolyn and I are blessed with many wonderful memories of good times spent with Bruce after he and I reconnected. His voice. Mannerisms. Infectious laugh. Dry wit. Sense of humor. His kindness, generosity, sincerity, and loyalty. His love of family first, including at least annual visits to his parents’ gravesite. His love of his friends — the kind of love that brought him to a marina to greet them upon arrival, or bring them hot bagels at 6:30AM on the morning they were leaving.

There are memories of the aroma of his favorite pipe tobacco, his love of a cold beer, whole fried flounder, or fried calamari with orange marmalade. More than once he took a small jar of marmalade into a restaurant, and after dinner left it for the chef to try. He could never understand why every restaurant with calamari on the menu, didn’t serve it with orange marmalade. Go figure!

Coffee. Bruce loved his coffee, specifically Cafe 1820 Clasico, harvested and distributed in Costa Rico. He ordered it by the case, not by the bag. On his first visit to see us in Mount Pleasant, he brought a bag for us to try. When a man orders his coffee by the case, you can be pretty sure he’s shared a bag or two with friends that shared his love of coffee.

Due to COVID-19, we didn’t make our usual, annual journey north this year. But in 2019, as we cruised north past Carolina Beach, Bruce called to check on our progress. A half hour later, from the upper helm I saw a fellow in a center console boat waving as he approached us from the north. Waving at passing boats is not unusual, but as we waved back, Carolyn said, “That’s Bruce!” When I turned to look, he was turning around to approach on our starboard side. Sure enough, he’d raced down the waterway to greet us by boat!

Our next stop after Wrightsville Beach was at Beaufort Docks Marina, in historic Beaufort, NC. As we idled toward our assigned slip, I saw a beautiful, antique, wooden motoryacht on the dock behind us. Later, when I walked over to take pictures of it, the owner invited me aboard. When he asked where we had traveled from, I replied that we had just come up from visiting a friend in Wrightsville Beach. He asked my friend’s name. When I said, “Bruce Allcorn,” he laughed, and proceeded to tell me that he and Bruce were part of a group of friends that met daily for coffee! I took John’s picture, texted it to Bruce, and immediately received a return text that read, “Don’t believe a word his says about me!”

As I write this, I’m enjoying a cup of Coffee 1820. Last night when I was putting the beans for this morning’s brew into the grinder, I read something that I had never noticed on the front of the bag, “Always with you.” I can’t help but wonder if it was one of the reasons Bruce enjoyed sharing bags of that coffee with friends. Two things are certain — Bruce’s friends will forever remember him fondly, and as Carolyn said, “Cruising through Wrightsville Beach will never be the same without seeing Bruce standing on the dock waiting to greet us.”

Some might say Bruce Allcorn was one of a kind. They would be right. This old world would be a better place if inhabited by more folks like him. Rest In Peace, Brother. You are loved, missed, and will never be forgotten. 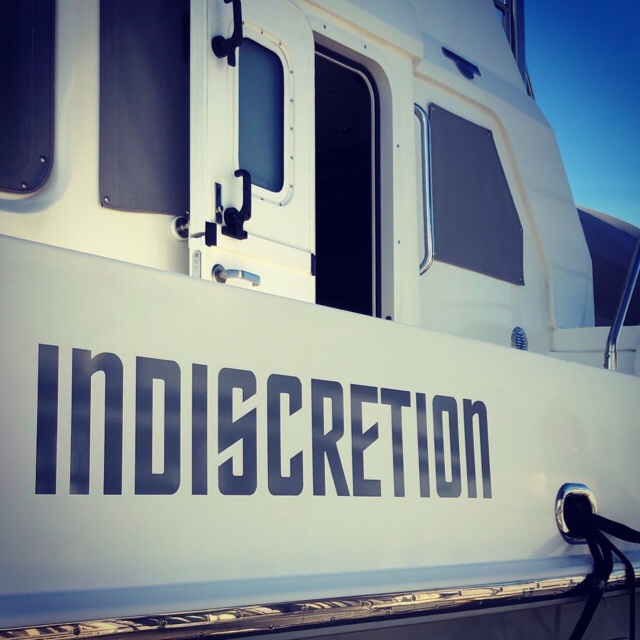 Some thoughts need to come out