During my years as head of the Asheville Convention & Visitors Bureau, I would often look down the mountain toward Raleigh, and think, “If I was director of tourism for North Carolina, I would…” Governor Jim Martin gave me that opportunity in 1989. When appointed, I was only the second destination marketing professional to hold the position.  The first time that I met Governor Martin, he asked one thing of me. “Dick,” he said, “as long as you serve in my administration, there is only one thing I will ever ask of you, and that is to always do the right thing.  If you do the right thing, the politics will take care of itself.”  To me, the same holds true for owning or managing a marina, except if you do the “right” thing, the success of the marina will take care of itself.

After twenty-four days in marinas, I have had more than enough time and experiences to say, “If I owned a marina, I would…” My travel industry career began in the hotel business.  There was a time that hotel, restaurant, and attraction owners didn’t recognize the fact that they were also in the HOSPITALITY industry.  Too often marina operators think they are only in the boating business, without realizing their potentially profitable transient customers have expectations that local boaters may not have.

During our visits to marinas along the way, three things have made the strongest “first impressions.”  As the old saying goes, first impressions are lasting impressions.  Since I have no doubt we may again visit some of these same marinas, I am not attaching marina names to any negative observations.  My intent is not to embarass, but to provoke thought, and to give much deserved credit where I feel it is due.

If I owned a marina, my top three priorities would be;

At a marina, NOTHING is more unsightly than abandoned boats, or liveaboards that are not maintained.  If I owned a marina, lease documents would clearly state that all boats must be clean and in good repair, at least above the waterline, AND any alterations to the boat’s original appearance must be approved by the marina.  Household window airconditioners and cheap plastic tarps would not be allowed to be used on any boat.  Torn, faded canvas and flags would not be allowed. The slip rental agreement would state that any boat not kept clean by the owner would be cleaned by the marina, at the boat owner’s expense. 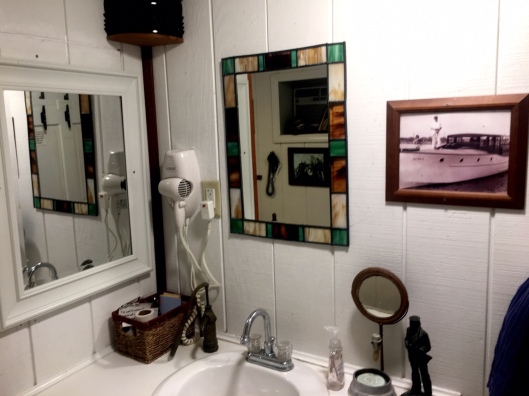 At Belhaven Marina the bath/shower facilities had ambiance, not to mention complimentary towels, bathmats, soaps (multiple), a hair dryer, air conditioning, AND A SUGGESTIONS BOX!

Condition and Cleanliness of Marina Facilities

Designated marina staff should be responsible for the cleanliness of all marina facilities.  Every marina owner, general manager or dock master should do daily inspections of bathroom and shower facilities.  Are they as clean and in as good of repair as the bathrooms in your home?  If not, why not?  They are being used by your paying guests.  I would also suggest that a female staff member — or the owner’s wife — also do a periodic walk-thru.  Women inherently have a better sense of cleanliness and the condition of such things as shower curtains, shower heads, and other amenities.   Absentee owners should at least do a quarterly, facilities inspection.

The reality is that some shower and bath facilities we used on our Chesapeake Bay trip were good, and some were bath/shower facilities were so poorly maintained and equipped that we chose to shower on the boat.  The shower facilities of one were so far from the docks that we will never use the marina again.

Attitude and Training of Staff

“Attitude is a little thing that makes a big difference.”  Sir Winston Churchill

At a well-known marina, Carolyn found the shower water to be cold.  When I went to shower, I found the same cold shower in the men’s room.  I dressed, walked back to the dockhouse and brought the fact that water in both the men’s and women’s showers were cold to the dockhand’s attention.

“That’s funny,” he said, “I was just up there and the water was piping hot.”

“You found hot water in both the men’s and women’s showers?” I asked.

“That’s strange,” I said, “The men’s shower was completely dry before I turned the water on.”

“We always dry the showers down after we check them.” He said with a smirk. “You must have turned the knob the wrong way.”

If the young man at the other, well-known marina had been my employee, he would have been fired on the spot.  We did not visit the showers again, and will never visit that marina again.  A marina designed in such a way that boaters must walk at least three hundred yards to the bath and shower facilities is a very poorly designed marina.

But that’s what attitudes and service are about.  Years ago in Asheville, Dick Bromley, whose company was reopening a long closed, downtown hotel called me at home on a Super Bowl Sunday.  I can’t recall our entire discussion, but I’ll never forget one thing he said when we were discussing attitudes and management.   “The fish always stinks from the head, Dick. The fish always stinks from the head.” 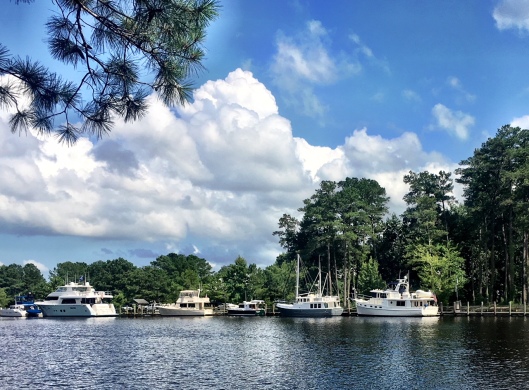 “Slow Dance” was one of the smallest boats at Atlantic Yacht Basin, an outstanding Chesapeake, VA boat yard that has been operated by the same family since 1936. You would think the family wrote the book on customer service and hospitality. Though we were one of the smallest boats, we felt the entire ABY crew treated us with the same warm welcome and respect as captains of the yard’s largest yachts.

One thing is for sure, the best marinas we have visited on this trip were run and staffed by people with a smile, positive attitude, and commitment to service and hospitality.  They had pride in their product and service.  We could all learn from their example.

NOTE:  Readers are encouraged to share their “best ideas and suggestions for marinas.” 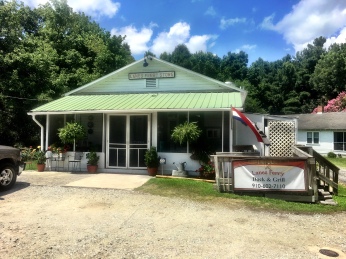 Stories and photos from Scotland