July, 2 2019.  Urbana, VA.  The most serious part of cruising is in the details — the preparation to be on the water for weeks, not hours.  Each spring since we got Slow Dance, we’ve done our “due deligence” and prepped the old girl to take us port to port safely and securely.  But this year we were in for a surprise.

Each year, Aaron Vickers, of Oil In A Day’s Work, services the main engine, transmission, and generator including new zincs and impellers.  Our motto is, “If it’s needed or questionable, do it.” Last year it was time for new electronics, so electronics guru, Jeff Sechrest of Tidal Marine Electronics outfitted Slow Dance with new Garmins and radar at the upper and lower helms.  “Admiral” Carolyn gets the credit for details related to provisioning.  If not for her, I’d be eating beans and living in the same clothes the entire trip!  Never underestimate the importance of the “Admiral’s” cruising details!

In marinas and along the waterways, people never see Aaron, Jeff, or the “Admiral’s” work, but they sure see the work of the person that “details” the exterior — and salt water, air, and sand take a toll on fiberglass, gelcoat, and paint.  Enter David Vickers, owner and operator of NAVY Details, Hollywood, FL.

Three weeks before leaving on this summer’s cruise I stopped by the boat to drop off a few things.  Walking down the dock I noticed a man and woman detailing a big Navigator a few slips down from ours.  When I came out of the cabin to start home, the man approached me.

“I love your boat.  I used to maintain one identical to it in Fort Lauderdale,” he said.

He pulled his phone from his pocket and said, “I’ve got to send Patrick a picture of you and the boat.”

A few minutes later Patrick called me.  “Dick, are you going to let David detail the boat?  He’s the best there is!  Honest!  He was the only one I’d let detail Irish Rover and the only one I’ll trust to detail my new boat.”

Needless to say, David agreed to stay in Charleston another week to detail Slow Dance. One week turned into about ten days as a couple of other owners in the marina wanted him to do their boats.  That is a testament to his beautiful work and attention to detail.

What separates David from the vast majority of other detailers?  He’s the consummate professional.  He hired a local young woman to polish the bright work, but David personally compounded, polished, and then waxed the boat — a time consuming three part process that left Slow Dance looking like it just came off a showroom floor.  And he literally detailed every square inch of the exterior, minus the canvas and Eisenglas, which are in need of replacement.  He cleaned and polished everything on the upper helm — which other detailers have ignored.  The biggest shock came when he called to ask about turning off power to the boat.  When I asked why, I was told he needed to defrost the large freezer on the upper helm so that he could clean and wax it — not done by previous detailers.  On a visit to the boat, his helper was cleaning shore power cords, the freshwater hose, all eight large fenders — again, not done by previous detailers.  After he finally finished detailing Slow Dance, he thoroughly washed and dried her.

I’m writing this post from Bridge Marina, in Urbana, VA.  So far we have overnighted in Georgetown, Little River, Southport, Wrightsville Beach, Beaufort, Belhaven, Coinjock, Hampton, Cape Charles, Onancock, and Urbana.  In every port people in the marina have been amazed Slow Dance is a thirteen year old boat.  For that I give full credit to master detailer, David Vickers, owner of NAVY Details. 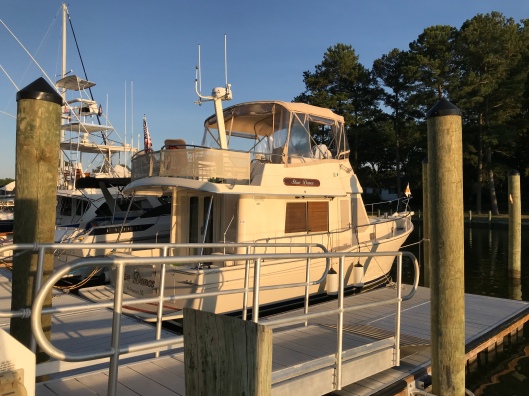 Slow Dance and the “Admiral” enjoy a Cape Charles sunset.

When David left Charleston with his camper, he was taking a slow journey up the east coast to Connecticut, where he will spend the summer — detailing boats of snowbirds that are among his Florida clients.  As he says, Connecticut is much cooler than Florida in the summer, and he has an established client base awaiting him there.  In late September he will start back south, and sometime in October he will put another coat of wax on Slow Dance, and that should hold her until he next spring when he will again detail her during his 2020 northern journey.

David Vickers is a detailer extraordinaire. 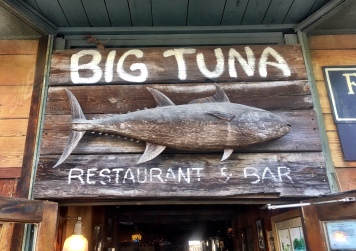 Cookops
Finding My Own Voice

One writer's quest to rediscover her writing mojo