As it turned out, Thursday was spent cleaning and prepping Slow Dance for the trip. And then, on Thursday evening we were warned by watermen working out of the marina that the “next few days” on the Bay would be so bad that even they weren’t going out. In the end one boat went out and returned early. In the words of one crew member, “It was f**king horrible. I feel like I’ve gone ten rounds with Mike Tyson!”

Today the couple on the sailboat that had been docked behind us left before sunrise, heading north in hopes of getting home off the Patuxant River. They texted us once on the Bay to let us know that conditions on the Bay were really rough and the lower Potomac had been even worse! At 1:04PM we received a text that they were finally safe at their home port. During their trip they saw only two big power boats and one sailboat. I sent her pictures of the two shown below, and asked if these were the two they saw. Her one word reply was, “Yes!” 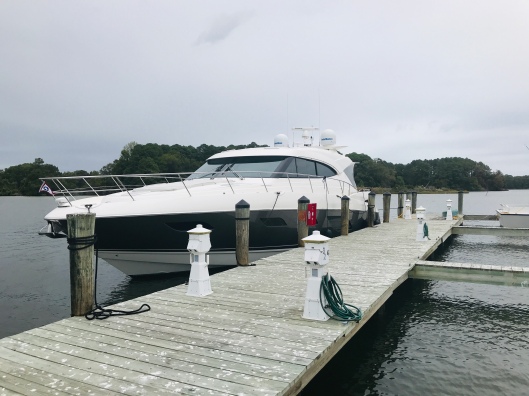 The big express yacht was the first to arrive. They are in route from Maine to Naples, FL. They left Baltimore this morning and conditions went from rough to horrible. They ended their day here — early.

The big Hatteras cockpit motoryacht left Solomons Island this morning. Just a few miles south of Solomons the conditions got so bad their dinghy — secured on the flybridge — bounced off the boat, and a tv came off its wall mount. In the winds and 5-7 foot wave conditions, it took an hour to save and secure the dinghy to tow behind them.

A delivery captain, that arrived on a 32-foot Back Cove a couple of hours earlier than the yachts, said he was into his ninth day of a five day delivery! He said that in his thirty-five years of yacht delivery he had never encountered so many days of high winds and 5-7 foot seas — inshore. The worst part was there was no interval between the waves.

It’s Sunday. As is our custom when we’re cruising, we live-streamed the Mount Pleasant Presbyterian Church service on the iPad. This afternoon, after hearing the stories of our new friends that went north, and the captains of the three boats that arrived today, we’re thanking the Good Lord that we followed the advice of the watermen and remained safely on the dock — drinking coffee — and “attending” church.

Photographed by Carolyn Trammell ~ A beautiful sunrise illumination of a rainbow and clouds in the western sky over Charleston Harbor.

Have you ever seen
A coastal sky
Just after a summer rain?
It offers a tranquility
That only nature can bring.

And if you get lucky
And a rainbow appears,
Study the colors
Reflect on your years.

For too often it happens
In the fast pace we keep
We take time only to
Work, eat, and sleep.

Study the rainbow,
Marshes and sky.
Reflect on life’s meaning
Before time slips you by.

Think of loved ones,
Both family and friends.
Count all your blessings,
For wrongs make amends.

Life is too precious
And days go so fast,
Live each to the fullest
And learn from the past.

Study the marshes
The rainbow and sky,
Reflect on life’s meaning
Before time slips you by.

Cookops
Finding My Own Voice

One writer's quest to rediscover her writing mojo